Skip to content
Thomas’ journal for the years 1877 and 1878 are remarkable in that there is hardly any subject mentioned except geology and geologists, and the new and related subject of microscopy, recently added to the list of topics covered by the Chester Society of Natural Science.  Even more remarkable is the way in which by 1878 the Robertson family of Palé were becoming interested and in some degree involved in Thomas’ geology.  In particular the elder daughter of the family Annie, who in 1872 at the age of 17 had married Alexander Sherriff, together with her unmarried sisters in law were accompanied and tutored in geological expeditions by Thomas.

In 1877 Thomas conducted both the Geological Society and the Chester Society of Natural Science on field expeditions:

July 20th Thursday The members of the Geologists Association and friends to the number of 34 came to Llandderfel station where there were seven conveyances waiting for them to take them to Llangynog. I had an invitation to go with them, so that I got ready. Mr. Davies acted as guide, so that he brought them to see my collection of fossils. I was glad to get introduced to some leading geologists such as Professor McKenny Hughes of Cambridge, Prof. John Morris, London University, Dr. Hicks of London, Mr. Hopkinson and other minor stars.

There were several ladies in the party. I gave them some refreshments, showed them my fossils which highly interested them, and took them afterwards to Brynselwrn quarry to get some graptolites. We next went up the Berwyns to the phosphate mine which was examined with interest and then to Llangynog where there was an excellent lunch ready for us at the expense of Mr. Doveston of ‘The Nursery’ near Oswestry whose two daughters were with us.

All were happy and enjoyed the lunch. I had to carve ducks, which I managed very well. Several amusing speeches were made after dinner. We also had Geological addresses outside in the evening. The day was very warm. The party proceeded to Oswestry in conveyances from there and I came home by those returning to Bala. I felt very much pleased to be with such high geologists. See paper for report of it [Paper not found – ed.] I may add that I had with me Mr. Barrois of Lille, France, Mr. & Mrs. Barbec of Pinner, Watford.

A key introduction was to Professor Thomas McKenny Hughes of Cambridge, who was to influence Thomas’ researches greatly, and who in subsequent years sent geologists from all parts of the UK and further abroad to Thomas’ door to view his fossil collection and discuss the geology of the Bala area.  By the time he was guiding the Chester Society, only a few days later, Professor Hughes had become ‘my old friend’!

July 31st Monday. I went to Bala to act as guide for the members of the Chester Society of Natural Science. The morning was wet, but we faced the hill by Wenalt [SH927340], then to Brynbedog [SH931 330], lunched and went on to Bryn–y-Gwyn [SH934330], where many fossils were got. From there to Gelli Grin [SH936331], and back to Bala where a first-rate tea was ready. I made the acquaintance of several new geologists, amongst which was Mr. Shore of Chester, and my old friends Mr. Shrubsole and Professor Hughes. All the party enjoyed themselves very much.

In May 1878 Mrs Sherriff (nee Robertson ) and her sisters in law were staying at Palé, where they caught Thomas enthusiasm for geology:

May 3rd Miss Robertson brought Miss Sherriff, and Miss Alice Sherriff to see my fossils and general collection; they were very much pleased. After seeing them we went together in the wagonette to Garnedd [SH896355] to see the Bala beds and to collect fossils. Mr. H.B. Robertson went with us. We got several nice fossils and walked back together.

May 18th I went with the Misses Sherriff & Mrs. Sherriff [nee Robertson] to Gelli Grin, to geologise. The first two worked uncommonly hard at stone-breaking – I never saw more enthusiastic ladies fossil hunting. Mrs Sherrif was painting a sketch. They all enjoyed themselves very much and were very courteous.

May 21st The above party went with me to Cynwyd, where I first showed them Cynwyd falls. I next led them up to the fossil ground, but it was raining, so that it was not very encouraging, but the ladies were cheerful and willing to proceed. When we got up two miles, the rain suddenly ceased, and it turned quite a fine day. On looking back we could see the Arenig white with fresh-fallen snow. We got several interesting fossils at the first ground. After luncheon we went to work at the upper beds at Bwlch-y-Gaseg, where we were unusually successful. Miss Sherriff was continually calling out that she was getting fat ones – that is large shells. We got Trilobites, shells and corals. Mrs. Sherriff sat sketching the distant view. They were very free, courteous and kind, and we got home well pleased with our trip, although it was a hard day’s work.

May 22nd Mrs. Sherriff and the Misses Sherriff here for three hours. I was naming their fossils, owing to their time being up to depart from here. They were very thankful for all my assistance.

I presume that the management of the garden at Palé continued satisfactorily since Mr. Robertson was content to foster his Head Gardener’s geological passions. 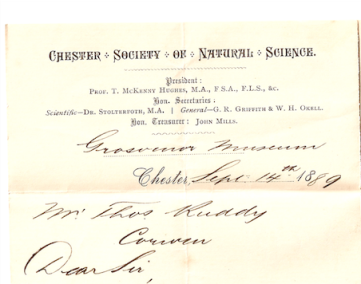 The Chester Society of Natural Science  was inaugurated in 1871 by Charles Kingsley, then Dean of Chester Cathedral. (Yes, he was also the author of The Water Babies). Its original subject matter was Geological, Botanical and Zoological, but further scientific subjects were quickly added, and by the end of the 1890’s Photography literature and art had been added.  The Grosvenor Museum in Chester had been founded in 1885 and became the home of the Society, whose artefacts continue to form the basis of the collections.  From its earliest days the Society began to forge links with other scientific and natural history societies in a wide area.

I have not been able to find any evidence that Thomas was ever a full or associate member of the Society, but his connection with it is very clear.  By 1876-7 he was already guiding parties from the Society and its corresponding local groups in geological and botanical expeditions- see here.  I believe that Thomas’ connection with the Society was initially through George Dickson, Chester Nurseryman who was responsible for ‘headhunting’ Thomas for the Palé post, and who as an early member of the Society.

Once again Thomas’ habitual ability to be in the right place at the right time came into play.  Thomas McKenny Hughes, Woodwardian Professor of Geology at Cambridge University became the President of the Chester Society, as seen in the letterhead pictured above.  Probably the greatest area of geological interest and debate in the British Isles was right on Thomas Ruddy’s doorstep.  The identification of the relationship and dating of the Silurian and Cambrian rocks centred on the Bala beds of fossils, those very fossils which Ruddy had been collecting, identifying and scrupulously labelling over the last few years.  For forty years dispute had raged at the highest levels of Geological science between followers of Adam Sedgwick, mentor and Professorial predecessor of McKenny Hughes, and the man who had become his arch rival, Roderick Murchison.  No wonder that Professor Hughes and the members of the geological section of the Chester Society quickly identified Ruddy as a valuable resource of knowledge and presence literally ‘on the ground’ at that much discussed and disputed location.

For a detailed analysis of the Cambrian / Silurian controversy and Thomas Ruddy’s relationship see here .